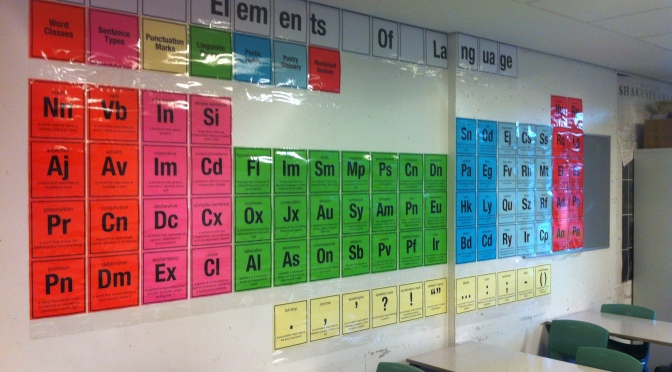 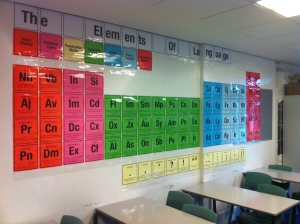 My recent project has been to reduce my displays from being crutches upon which pupils were relying, to being the sites of memory cues for things that they should know.

Previously I’ve used all sorts of displays, full of poetic and rhetorical devices, sentence structures and examples of uses of punctuation. I found that pupils were not committing these things to long term memory and solely relying on what was written on the classroom walls. Clearly, this doesn’t help them when they write elsewhere, most obviously in the exam hall.

So, I looked at a way of reducing all of the information I’d previously been giving them to mere cues that could help them access the information from memory and this is where I am now: the periodic table of English.

The codifying of terms will hopefully not only serve as memory cues, but also be useful as shorthand for annotation.

It’s currently a work in progress, and if I find its use is limited I will go back to the drawing board. One of the areas that I am concerned about is the information on each element: this will be revisited as I begin to gauge its use – whether it is to reduce the amount of information or just the visibility of it.

Interestingly, I tweeted a picture of this a few weeks ago and the response was one of aesthetics. I wanted to post this brief précis  of how I’m using it because it has its basis in something other than just aesthetics: it is a project on learning, memory and memory cues.

Many people have been asking for the files, so here is a link to them. I would add a caveat that, as these are the elements that I teach my classes, you should adapt them for the things that you use with yours and not just rely on these as standard elements.

(And I apologise if you lose any formatting due to font changes on your operating system – this was created in Helvetica Neue.)