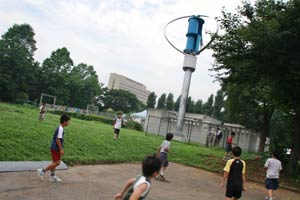 In my last blog post, I wrote about taking one’s time. The flip side of this, of course, is that we sometimes invest too much time (and effort and money) in things that have very little or even negative impact. Why do we do this? It’s simple human nature, according to psychologists and behavioural economists. But that doesn’t make it right.

Psychologists describe this as the sunk cost fallacy: when we invest in something, our emotional attachment to it is such that it becomes harder to abandon it. This may result in an escalation of commitment: we will commit more to this investment, in spite of any previous negative impact, in the hope that it will eventually return positive results.

One of my favourite examples of the escalation of commitment comes from the corridors of power in the Japenese city of Tsukuba.

In 2004, the Tsukuba Municipal Government decided to invest in green energy across the city’s schools. They commissioned experts at the highly-respected Waseda University to design and plan a system of 75 windmills and generators at 53 schools. It was proposed that these would create enough energy to power the schools and also produce a surplus that could be sold back to power companies, bringing extra funds to the schools. Not only were there huge financial rewards to be had from the programme, city leaders were also keen to point out that it would reduce carbon dioxide emissions as well as encourage a generation of eco-friendly children. Plus the schools could all run science and data projects on wind turbine energy production.

The following year, the university initially set up 23 small windmills at a cost of around ¥298 million to the city.

But there was one problem. The windmills didn’t turn.

The university hadn’t really planned for the fact that there wasn’t enough wind in Tsukuba to power the windmills. They largely sat lifeless, except for a few weeks of the year in March when winds arrived with enough vigour to give them a little stir. But the winds soon disappeared again and the windmills sat dormant.

So the government cut their losses, right?

No. They actually spent more money in order to try and show that these windmills could be successful. And how did they do that? They imported power to make the windmills move. Yes, that’s right. They spent money (and produced carbon emissions) artificially turning the windmills to give them the appearance that they were being powered by the wind. In fact, in 12 months of operation the windmills consumed 43 times more power than they generated.

The city eventually – rather sensibly – aborted the project. And they then successful sued Waseda University for around ¥200 million for selling them a dud project.

The problem is not only one of sunk cost but also one of opportunity cost. What could the city officials have been doing to meet their goals of energy efficiency instead of continuing to pile more resources on a failing project?

As you read this, I am sure you are thinking about how ridiculous the decisions of the Tsukuba officials are. But the sunk cost heuristic is a powerful bias and we are all fallible to it.

The big fool said to push on

It is from this song that behavioural psychologist Barry M. Staw lifted a line to title his paper, ‘Knee-Deep in the Big Muddy: A Study of Escalating Commitment to a Chosen Course of Action’.

Staw’s study details an interesting experiment in which subjects were asked to make investment decisions over a period of time, given some information on how those investments performed. His study concluded that “individuals who are personally responsible for negative consequences will increase the investment of resources in a previously chosen course of action”. So not only do we often carry on when we have no impact, according to Staw we are actually more likely to carry on and escalate our commitment when we have negative impact. The big fool said to push on.

In schools, we are all susceptible to continue down a path that yields little to no impact because of our emotional attachment to it. I have certainly done so and probably will do again. @DHTJohn says here that one such area might be our escalating commitment to pre-exam interventions, stating that he has seen “schools where it’s observable that this culture of extra lessons actually makes results worse.” Headteacher John Tomsett also suggests a similar attitude to intervention in his justification of how his school reduced commitment to such intervention in favour of a different path.

The area which gives me the most concern in the face of our liability to  the sunk cost fallacy is where I see massive investment in technology in schools. Amongst other things, there are many schools now which have invested heavily in one-to-one devices for their pupils. I wonder how easy it is for decision makers to be objective given the huge financial and emotional commitment made? If anyone knows of an objective response to such trials, I would be really interested to see it.

I also think that the major technology companies have come up with a neat trick to ensure that we commit emotionally to their products: establishing their own accreditations for teachers. Just a quick look on Twitter and you will see teachers who identify themselves as certified by such companies. Some individuals even go as far as to include company logos in their Twitter handles. People actually tie their very identities to these companies. I would hypothesise that, in this way, people are sinking huge emotional costs in such a way that they would find it virtually impossible to change direction at any point. Worse, they might escalate their commitment despite a possible lack of impact.

Ultimately, the more we invest in something, the more likely we will continue to invest in it.

So, whilst I advocate taking one’s time over something before making a decision, I would also warn that such an investment of time can sometimes sway our thinking. It’s not easy, is it?

And here’s the rub: I decided earlier that I was going to write this post out and then delete it – “murder [my] darlings”, as Arthur Quiller-Couch puts it. Why? To prove that I could sink costs into something then abandon it (I planned to rewrite it again later).

And guess what? I couldn’t do it. This post is probably rubbish (it almost certainly is), but such is my emotional attachment to the decisions I made in writing it, I couldn’t let it go. Heck, I’m even just about to click ‘Publish’.  The big fool said to push on.