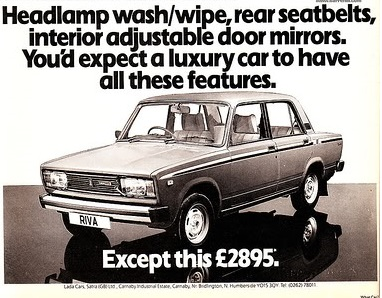 Here’s something you can try at  home:

Now let’s stop pretending that you actually did all of that (but kudos to anyone who did: you’re in my fraternity now – I’d show you the handshake but, you know, you have wet hands). The sensation that one feels when placing both hands in the room temperature water is that the hand that was in the cold water first now feels as if it is in hot water, and the hand that was in hot water now feels as if it is in cold water.

This is called perceptual contrast – the idea that our perception of something is affected by the context in which it is placed. In this instance – as in most examples – by presenting two different things directly after one another, our perception of the second thing is altered. It’s a form of anchoring, which I wrote a little about here.

This phenomenon isn’t just present as a physical sensation – it also works psychologically. You will have seen lots of optical illusions like the one below. They basically work on the same principle – we perceive the contrast between the two orange circles to be greater than they are. In fact, as your relentless experience of this type of trick has probably told you, the two orange circles are actually the same size. It is the context that makes you perceive the contrast.

But where perceptual contrast really comes into its own is in the world of retail as, in the words of psychologist Robert B. Cialdini, a “weapon of influence”. In his book ‘Influence: Science and Practice’, Cialdini refers to how both clothing retailers and car dealers use perceptual contrast to make more sales. He writes:

Suppose a man enters a fashionable men’s store and says that he wants to buy a three-piece suit and a sweater… Clothing stores instruct their sales personnel to sell the costly item first. Common sense might suggest the reverse: If a man has just spent a lot of money to purchase a suit, he may be reluctant to spend very much more on the purchase of a sweater; but the clothiers know better. They behave in accordance with what the contrast principle would suggest: Sell the suit first, because when it comes time to look at sweaters, even expensive ones, their prices will not seem as high in comparison. The same principle applies to a man who wishes to buy the accessories (shirt, shoes, belt) to go along with his new suit. Contrary to the commonsense view, the evidence supports the contrast-principle prediction.

The same principle is applied to car sales. Quite often you’ll see an advert for an ‘on the road’ price of a car. Once you’ve acquiesced to pay this price for a car, the dealer will offer you add-ons. After you’ve spent thousands on a new car, a few hundred on some added flashes and gadgets seem trivial and you are more likely to pay for these. I don’t know about you, but I’ve lost count of the times that I’ve paid for add-ons to expensive purchases that I’ve made.

This ‘weapon’ is also prevalent in restaurant menu design. Menu Engineer (‘Mengineer’?) Gregg Rapp talks about how he places expensive items on menus as decoys to make other items seem more reasonable. See him expose his tricks in this video (skip to around 2mins for his use of perceptual contrast):

It is with this phenomenon in mind that I think we should have reservations in our reception of Ofsted’s revised school inspection handbook, released this week.

After years of campaigning for Ofsted reform (by the way, that is a brilliant list of blogs compiled by de facto Chief Librarian of the campaign, Joe Kirby), the Rebel Alliance, led by legendary master Old Andrew Kenobi and flaxen maverick Jedi hero David Didau have recently begun to engage the inspectorate in dialogue. This has resulted in reiterations of policy and rewrites of the handbook, culminating in this week’s revised guidance.

The revisions have been received quite warmly – who could complain about the reiterations that inspectors – and I might be paraphrasing here – “definitely 110% guaranteed-or-your-money-back won’t be grading individual lesson observations, oh no siree, Bob, not this time and you can take that to the bank”?

But is it enough? Are we in danger of accepting this Gallifreyan regeneration of the inspectorate because, well, it’s a bit different to the last one and the perceptual contrast means we see that difference as greater than it actually is? Is this a reboot or is it just a shot-for-shot remake with a different cast? I must admit, I think that the differences between this revision and the last aren’t as great as I’d expected them to be.

It’s really important that we look at the inspection process from September in isolation and not in the context of the last few years. It doesn’t matter if it is better than what we had before – perceptual contrast has no actual value. What we should be asking is, just as the relentless bloggers have been asking all this time, is this incarnation fit for purpose? Is this incarnation actually right? I’m not sure that it is… yet.

Now, above all, is the time to keep up the pressure. The education blogosphere is organising. We, the teachers, are reclaiming our profession. The momentum is rising. The next campaign target is to stop Ofsted grading teaching altogether.

If we sustain it, radical reform of the inspection regime is within reach.

Now, go and dry your hands.

‘Influence: Science and Practice’ by Robert B. Cialdini

8 thoughts on “Inspector who? What to make of Ofsted’s latest regeneration”