It’s been a hundred years since Professor John Hattie released his 2008 seminal work, Visible Learning. To commemorate this, we present to you summaries of our meta-analyses of some of the educational interventions used today, in 2108.

Education has come a long way since the ubiquitous Robinsonian approach to education was adopted and schools churned out innumerate and illiterate finger-painters. Many interventions were introduced in the ensuing years to counter this outdated and unsuccessful approach. Here we present evidence on some of the latest approaches for 22nd century learners.

There were huge claims made for NZT-48 Nootropic Improvement of Cognitive Functioning (NICF) in its early use in education in the mid 2050s. Based on the premise that we can only access 20% of our brains, this small clear nootropic pill purported to allow pupils access to 100% and thus improving cognitive functioning.

In further clinical tests, the drug was proved to have “no cognition-enhancing effects”, suggesting that any initial success reported by the manufacturers was down to the placebo effect.

In fact, neurologists have gone further and have been able to report unequivocally that the 20% rule is a myth and that “we use virtually every part of the brain, and that (most of) the brain is active almost all the time.”

Despite all this overwhelming evidence against NZT-48, however, the approach is still used by many teachers who state that, “it works for me and my pupils.”

It is a one-to-one reading intervention that involves pupils using their own sentient S.A.I.N.T. robot to support reading input. Pupils use their robot to read for them and supply them with any knowledge ‘input’ that they require. The robots can digest knew knowledge at a phenomenal speed and then pass it on to pupils via conversation as required.

The intervention has been hugely popular, with many schools engaging institution-wide one-to-one robots for their pupils. This has put NOVA Laboratories at the forefront of the ‘edtech’ industry. Indeed, NOVA Laboratories run a Distinguished NOVALab Educator programme, where teachers can get a certificate for using NOVA Laboratories products in their classroom. This has resulted in increased sales and income for the company, although there is very little empirical evidence to suggest that it has improved outcome for pupils.

The cost of this intervention is huge, yet it continues to be adopted across schools, despite the paucity of evidence to support it.

One of the concerns of this intervention is that it outsources memory and means that pupils aren’t actually learning the information that their robot shares with them.

Researchers have concluded that schools are often convinced to invest in this unevidenced intervention due to a number of appealing elements. These elements include: the attractive brand of NOVA Laboratories; the ubiquity of the product in education giving a false impression of success; the sunk cost effect (once some money has been ‘sunk’, schools often increase their investment); a belief in narratives surrounding ’22nd century learners’ and ‘robot natives’; and even the general shininess of the S.A.I.N.T. robots.

It is interesting to note that, despite the huge amount of money that companies such as NOVA Laboratories and other similar companies stand to make by selling this type of intervention, these companies are still yet to commission, produce or identify any successful empirical evidence to support their products’ use in education.

The Memory Implant Programme (MIP) is a short intervention programme designed by Rekall Inc. in 2098. After the company’s problematic start as a holiday company, they lost their ABTA membership and were subsequently bought out by billionaire philanthropist Romeo Beckham, who turned it into an education enterprise.

This intervention involves pupils having memories of knowledge within the various subject disciplines implanted into their brains. Its initial rollout on Mars was so successful that it rocketed the Red Planet to the top of the PISA rankings in 2099, where it stayed until the programme was rolled out galaxy-wide in 2105.

Its a very simple intervention which takes very little time and resource (once a memory resource is produced, it can be used for all pupils, undifferentiated) and has the highest effect size we’ve ever seen for an education intervention. MIP has managed to wipe out illiteracy across the known universe and ensures that all pupils are able to obtain the same exceptional level of academic and artistic achievement. It has created true equality in education and allowed all pupils to pursue their dreams. We don’t use these words lightly when we suggest that this is probably the perfect education intervention.

Despite this considerable evidence, however, there are still many teachers who prefer to dilute the effectiveness of MIP as part of a mixed methods approach, citing that “all children are different and they all learn differently”. 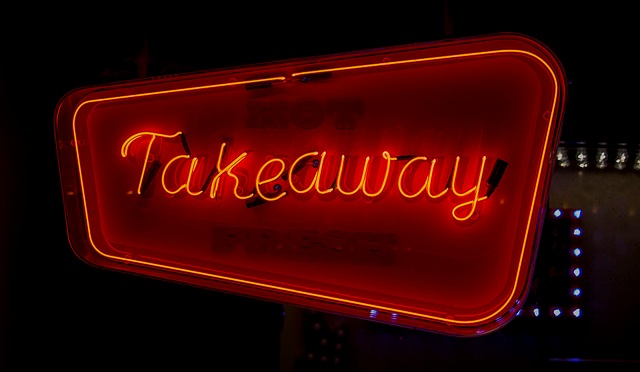 One of the signifying mantras of progressive education’s child-centred approach is the idea of giving pupils elective choice in what or how they study.

One example of this choice in action is the phenomenon of ‘takeaway homework’. 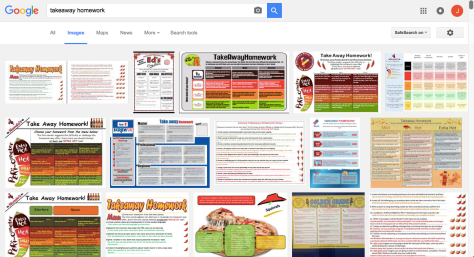 For the uninitiated, this is where pupils are given a menu (usually emblazoned with the branding of a high street fast food chain) from which they get to choose to complete one (or some) from a range of homework tasks.

Whilst I’ll concede that it isn’t completely at odds with it, this idea does seem to sit uncomfortably with another of progressive education’s bogeymen: the marketisation of education (you can also add ‘Poundland pedagogy‘ as another bedfellow in this conflicted ménage à trois).

But that isn’t my main concern with takeaway homework. Neither is it the stealthy promotion of junk food that these menus might seem to endorse. It isn’t even, as Chris Moyse suggests, the excessive workload that takeaway homework creates.

No. The concern I have with takeaway homework is that, whilst it claims to be promoting valid homework, it’s actually doing the opposite. And that’s because it’s doing both.

You see, I think that takeaway homework can be seen as a thought experiment, similar to the paradox of Schrödinger’s cat.

This is what I mean. Take a look at this schematic figure of takeaway homework. 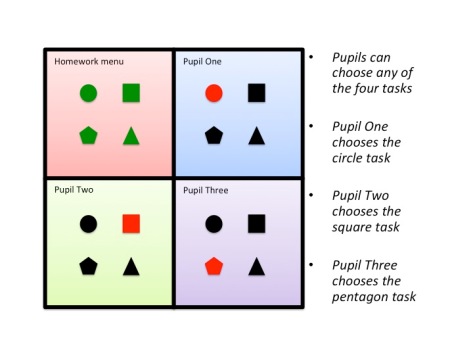 Pupils are offered 4 tasks to choose from. We tell them that these tasks are all valid and useful. Pupil One chooses the circle task. This means that they do not complete the other three tasks. We are now saying that, if we are happy for Pupil One not to complete these, they can’t be important. On the other hand, as they are completing the circle task, this must have validity.

Put simply, the tasks on this menu are both valid and invalid at the same time. By organising homework in this way, we are suggesting that each task is simultaneously important and unimportant; useful and useless; they have both a learning outcome that we think pupils need and no learning outcome at all.

And the crux of all this is: if we are saying that some of those tasks are unnecessary but it doesn’t matter which, then we are actually saying that all of them are.

This is the problem of takeaway homework.

I think that homework needs to be directed, with a clear intention and learning outcome to be effective. Woolly, ‘anything goes’ approaches like takeaway homework is the opposite of this. It seems to hinge all of its claimed ‘effectiveness’ on things like motivation and engagement, which, as Professor Robert Coe tells us, are actually poor proxies for learning:

Where Hattie has thrown some doubt over the effectiveness of homework as an intervention, wouldn’t it be better to, as Tom Sherrington says, “be more specific and precise” in the tasks we set?

Even its advocates must agree that takeaway homework is far from specific and precise. And with that in mind, I’m personally hoping that we soon see yesterday’s takeaway homework menus as tomorrow’s fish and chip paper.